Go on.  I dare you.  Ask any scientist, historian or handyman how exactly did they do that?
…and I suspect you’ll learn that documenting everything is often neglected over doing something.  That’s why I hate writing “methods” sections as much as anyone else.  But it’s a necessary evil.  So here’s how I made maps and things…

GIS and other software:

Google Earth has its uses (including giving the illusion of elevation), but to analyse data and process satellite imagery I used ArcView 3.2 (yes it can be made to work on a Windows 10 machine).  Arcview is no longer supported, but it could do most of what I wanted to do – and most importantly I already knew how to use it.

Increasingly I rely upon QGis, which is more modern and sophisticated.  It comes with the drawback of a steep learning curve, and the huge advantage of being free.

Being “open-source” software, it contains glitches and bugs…but it also comes supported by a worldwide network of people who believe, as I do, that increased access to information about the state of planet Earth is intrinsically a good thing.

A partial list of other tools included data conversion tools such as shape-to-kml, kml-to-shape plugins, ShapeChk, Photoshop Elements, IrfanView, GRASS, notepad, Word, Excel, Systat, and probably a host of others that I’ve forgotten.

My smart phone came in handy, allowing me to plot nests and cutblocks on maps conveniently provided by cyclists.

In May of 2015 I approached both the City and the Province, asking for GIS shapefiles for things like contours, streams, lakes, roads and legal boundaries, together with satellite imagery.  They could be had, I learned, for a fee.  A several thousand dollar fee.

So I learned to improvise – and geo-reference paper maps – and I spent huge amounts of time re-creating data that could have been made available for the cost of a USB stick.

And I learned that the entire historical Landsat record is available from the US Geological Survey.

Enormous joy was quickly tempered by the realization that not all imagery is created equal, and despite having hundreds of gigabytes of information at my fingertips, now I had to make sense of it – and learn how to tell a story with it. 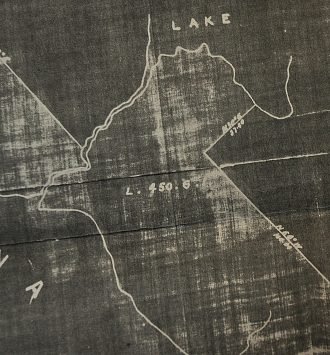 I found it interesting that the land area has actually grown since 1878…presumably because of infilling for millsite and dam construction.

Georeferenced and plotted on a 2000 baseline satellite image. Somebody suggested it looks like Bart Simpson…

No comment – except that you do have to laugh occasionally.

Pre-1878: This is Tla’Amin Traditional Territory

I would be remiss not to mention the broader context: that is, ALL of the land parcels discussed in these pages are located within the traditional territory of the Tla’amin First Nation – image via Tla’amin Treaty Society

However, within the context of Lot 450, there is no overlap between existing land tenure and Treaty Settlement Lands that will come into effect in April 2016 – image via Powell River Community Foundation

The Story of Landsat and Lot 450

Wow. Imagine. A publicly-funded government agency actually making all their data public! Hurrah for NASA and the US Geological Survey!

…the only problem being, of course, downloading way too much of it, and keeping it organized! Here’s an image from ERTS (Earth Resources Technology Satellite), which was (happily) renamed Landsat 1. And those layers on the left represent about 56 GB of data on my hard drive…

Raw satellite imagery really doesn’t look like much…you have to start fooling around with different combinations of bands (wavelengths) to begin to be able to interpret them. This image from 1989 combines bands 4, 3 and 2 to produce a useful image for picking up vegetation changes over time.

By evaluating each color, one can then “subtract” one image from another, therefore “classifying” changes from year-to-year. This image shows forest harvesting, with each “blob” representing a clearcut added in a given year – there are rather a lot of them! In this case, we see logging going back to 2000.

Here are the same data, superimposed on 2014 imagery so as to highlight the clearcuts added that year.

Here we are in 2015, and if you look very closely you can see the Island Timberlands harvest on Lot 450.

Zooming in, it was gratifying to verify that the size and shape of clearcuts mapped by Ellen, Christopher and myself were in the right places.

Don’t you just love it when all the elements of a plan start coming together?