It would appear that I’ve been writing to elected representatives and government officials for years…
…eliciting various levels of responsiveness.

What have I learned?
Here goes:

The National Museum of Science and Technology

The letter at left is dated 29 Jan 1974. Since I was born in March 1960, the initial “query-from-a-concerned-citizen” to which this refers was sent by a 13 year-old – a fact that surprises even me.  The primary object of my attention was Bristol Beaufighter RD867, which you can learn more about from the photos at right.

Sadly I didn’t keep a copy of my letter, but I remember mom setting me up with the typewriter, and dad helping me to find out where to send it.

I remember how upset I was when I first saw that aircraft in the flesh.  It’s an endangered species, you see.  A bunch of Canadians died flying it.  Of 5,900+ beaufighters built during WWII, only a handful remain – and I was deeply concerned about the future of this one.

The Russian Academy of Sciences

Fast forward a lifetime, during which my life changed because I became interested in another endangered species – the Vancouver Island marmot.

In 1997 I had the opportunity to visit Russia.  I was invited to meet with the Minister of Interior, at his request…in the Lubyanka of all places.

Thus I returned home with another letter, dated 2 September 1997, that described the plight of marmots as one of “international importance”.  This letter had the effect of kicking things up a notch.

MacMillan Bloedel Ltd donated a cool $1 million, and Timberwest followed.  BC and Federal governments joined the party, matching funds and making public commitments to marmots, and to science.

And true to their word, my Russian colleagues provided useful suggestions for breeding marmots, which I believe ultimately prevented the extinction of a species.

And then Canada seemingly entered a strange, Alice in Wonderland period, choosing to elect leaders who neither led nor listened, and hiring civil servants who seemingly do not appreciate the “service” part of that phrase.  Perhaps they’re just overworked.

Given the purpose of this website, a more pertinent example of “responsiveness” relates to the Agricultural Land Reserve (ALR) – and more specifically, to the current application to exclude land from it to facilitate development of Sino Bright private school.

I wrote to the Land Commission on 4 July 2016. Here’s my letter.  The footnotes in it are the very reason for my last three posts here.

I wrote again on the 15th, requesting details about the 2007 Decision that was missing from the ALC website, and mentioning the illegal road on the ALR.  Finally I picked up the phone, leaving a detailed message on the 17th.

Eventually I did receive a response – of sorts.
I refrained from replying that “yes, I understand that my submission will now become part of the public record – and that’s why I wrote it”.

The Municipality of Powell River

Last, but not least, is the letter I crafted to the Mayor and Council of Powell River.  It wasn’t just a letter; it was a proposal.  In support of it, I also made a powerpoint presentation as a “Delegation” to City Council on 16 July 2015.

My pitch was simple: I was asking for money to:

Anyway, last I heard, my proposal is still awaiting a recommendation by staff.   Me?  I just went ahead and started doing the work.

This idea of writing to elected representatives or civil servants in the reasonable expectation of responsiveness – i.e., a considered, thoughtful reply – has this idea become outdated?

Or have I just lost my touch?

This is the aircraft the National Aeronautical Collection expected to get. RD867 as seen at RAF Abingdon, June 1968.
– M. Harries via Tangmere Military Aviation Trust

Here’s the same airframe as seen in September 1968 at Horse Guards Parade, London, UK, on the 50th anniversary of the Royal Air Force.
Looks nice and complete, doesn’t it?
– M. Nason via Flickr

Sadly, when the airframe arrived in Ottawa in September of 1969, it was found to be missing the engines, propellers, and most of the internal fittings. In short, it was a “shell”.
This photo is undated, but was likely taken during the winter of 1969-70, soon after its arrival. Note that there’s not even a tarp over the broken canopy perspex.
– D. Pascoe via Airliners.net

This image is also undated, but shows the condition that I remember, parked outside next to the Dakota (military DC-3) off to starboard
– Canadian Air and Space Museum (CASM)

It sat outside for a long time. Here it is in August 1987, parked in front of the newly-constructed National Aviation Museum (NAM). The wings had been removed at this point.
-A. Thomas, Wikipedia Commons

Here the wings are back on, and some fresh paint had been applied, but it’s still parked outside. This is September 1994.
– P. Schaller via Picsrr.com

Main fuselage, stripped for eventual restoration in the storage hangar, October 2014
– A. Bryant

Another view of the fuselage in the storage hangar, October 2014.
– A. Bryant

It’s gonna need just a bit of work yet. This is the cockpit section on display in the main hangar, October 2014
– A. Bryant

Ok, so the beaufighter’s not finished yet. But hey, the museum had these really cool painted cardboard cutouts that you could have your photo taken in…national museums have to keep their priorities straight, right?
– A. Bryant

It was really strange to have Red Square almost to myself – I believe they were setting up for a music video, but I never found out for sure.
– A. Bryant

There’s nothing like the Moscow subway system.
– A. Bryant

En route to Cheboksary.
– A. Bryant

…or at least that’s what it felt like.
– A. Bryant

Russia is a BIG country. It’s 748 km by train from Moscow to Cheboksary…and it wasn’t a bullet train.
– Google Earth

Some of the conference venues were predictable…this is the main meeting room in the “Administry of the President of Chuvash Republic”, Cheboksary…
– A. Bryant

…and some of the conference venues were not so predictable…
– A. Bryant

Yours truly waxing poetic in Cheboksary <
– A. Bryant

I really liked visiting some of the smaller collective farms.
– A. Bryant

This rather made me feel quite at home…
– A. Bryant

In many ways, it was not what I’d envisioned an international conference to be like.
– A. Bryant

Nor did I anticipate the nature of Russian marmot facilities. Here’s Ivan Rymalov with a Marmota bobac –
– A. Bryant

Here’s a local “protected area” for bobac marmots.
– A. Bryant 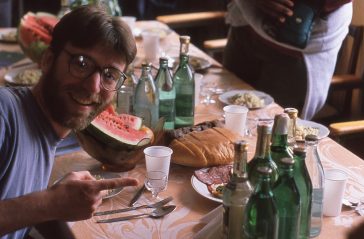 To say we were well treated would be an understatement! Here’s Dan Blumstein enjoying lunch.
– A. Bryant

Back in Red Square, this time with Ken Armitage, the real “Mr. Marmot”.
People sometimes ask “would you ever wish to go to Russia again?”
– A. Bryant

In a heartbeat. There’d be dancing in the streets…
– A. Bryant

I know of several other people who wrote to the ALC (Thank You!) and received either no acknowledgment at all, an automated "out-of-office" reply, or got exactly the same form letter I did.
Hardly likely to impress even a 13 year-old, methinks...
Click on the spreadsheet to enlarge.

The whole presentation was 37 slides….but here’s a few of the highlights…

After a brief “who am I?” introduction, the focus returned to Lot 450.

…and the extent of the 2015 harvest by Island Timberlands…

Noting the public confusion over what Lot 450 actually was, or who owned the trees…

I began with the very 1st usable satellite imagery of the area, on 11 October 1972. Doesn’t look like much, does it? 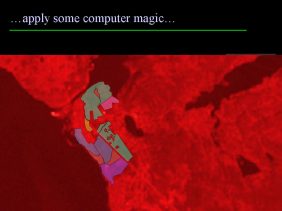 Indeed, it’s only when you start to combine various wavelengths (bands) does it start to look like something…

But as sensor resolution improved, the image quality got better. And you could do more with it. This image shows forest harvest cutblocks, color-coded by year, going back to 2001.

I noted that Block 55 was listed for sale, and asked “what would be the repercussions of such changes to the forested landscape as a whole?”

So basically, I was proposing to develop a “planning tool” that would seek to quantify things…

And thus help our community be more well-informed, and our government to be more responsive…

Send me an email…

If you like this work, help me to do more of it...

← Housekeeping matters: more about the ALR ← If a tree falls in the forest: will the Supreme Court hear it?